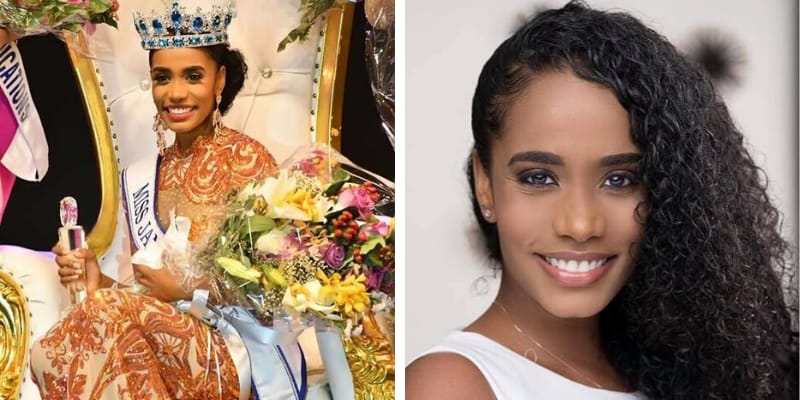 Toni Ann Singh is the Jamaican beauty queen and winner of Miss World 2019. She hails from the parish of Saint Thomas and is the 4th Jamaican to be crowned Miss World.

The pageant took place on Saturday 14 December in London and saw women from around the globe compete for the prestigious title and the famous blue crown.

Peter Andre was joined by former Miss World Megan Young as host for the competition. The Australian singer/songwriter also performed his track Mysterious Girl, with all of the contestants joining him on stage.

UK duo Misunderstood also took to the stage with their song, Chewing Gum and the three-hour broadcast saw contestants show off all the hard work they’ve been putting into the competition in the last few weeks, including prepping for a synchronized dance routine.

Miss World Jamaica Toni-Ann Singh stunned the audience with her amazing voice when she sang Whitney Houston’s classic, I Have Nothing. The beauty queen took her final walk in a stunning silver dress after being crowned by Miss World 2018 Vanessa Ponce De Leon.

She now becomes the fourth Jamaican to win the title — Carole Joan Crawford in 1963, Cindy Breakspeare in 1976 and Lisa Hanna in 1993. Singh, who had secured her place in the top 40 by winning the talent competition at the “Beauty with a Purpose” Gala Dinner in London, advanced to the final round of the competition along with Miss Nigeria, Miss Brazil, Miss India, and Miss France.

In addition to dancing to Jamaican singer Koffee’s Toast, she also performed her version of Whitney Houston’s “I Have Nothing” live. Singh was ahead of France who was second and India who was third.

How old is Toni Ann Singh? She was born in 1996 and from Morant Bay, St. Thomas, Jamaica and she is 23 years old. Currently, she has 36.9k plus followers on Instagram.

At the age of 9, she migrated to the United States with her parents and then lived in Florida along with her family. In an Interview with Jamaica-Gleaner, she said.

I’ve been singing since I was very young. I sang in church with the children’s choir, and I’ve been classically trained since I was nine. I would say it’s a thing in my family because we all like to sing together. I even have an uncle on my mom’s side who does music a lot – Prince Theo.

I think there was a time when I did when I thought about what I wanted to do with my life – and that turned out to be serving people, and medicine, and helping people in my community. I haven’t written it off. If the doors open, why not? In free time she likes to watch Game of Thrones, The Office, The Mindy Project, and The New Girl.

She completed her education from Florida State University and earned a degree in psychology and women’s studies. After graduation, she first competed in the Florida Caribbean Association.