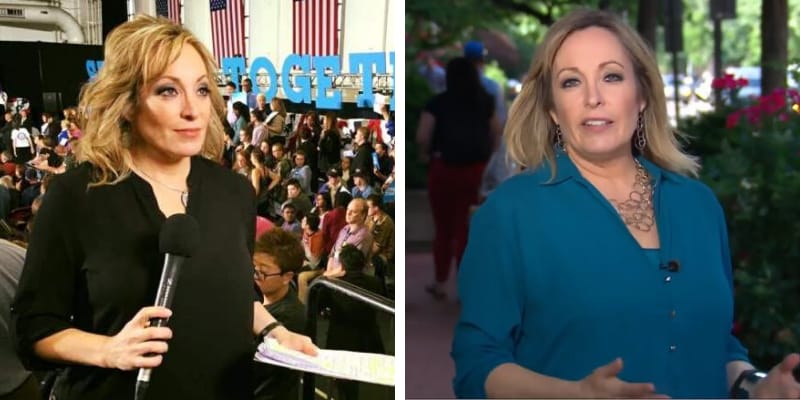 Kimberly Halkett is a Canadian journalist who has covered the White House and American news since 1998. On July 21st she was caught in a hot mic moment during a press conference and was accused of scolding White House press secretary Kayleigh McEnany “a lying b****.”

The broadcast was live on July 21 during the White House press conference in which Kimberly saw sparring with McEnany over issues including Russian interference in the elections and mail-in voting. Furthermore, McEnany eventually cited a Wall Street Journal op-ed while saying there are “questions about mass mail-out voting,” prompting Halkett to interject. As a result, McEnany lectured the reporter.

McEnany said “I know you don’t want to hear them, which is why you talk over me, but I encourage you to read the op-ed,” but Halkett then attempted to ask another question, which McEnany waved off, adding that the Al Jazeera reporter had already gotten two questions in.

Then, Halkett mumbled a quick retort—caught on the hot mic—that sent parts of right-wing Twitter into a frenzy. She was accused by some people of calling McEnany a “lying b*tch,” while others backed her up.

Here is audio in question: pic.twitter.com/NNWeCnjGCf

Breitbart’s White House correspondent Charlie Spiering tagged Halkett to ask her if she called the press secretary a “bitch.” She wrote in response “The answer to your question is, I DID NOT. What I said was, ‘OKAY, YOU DON’T WANT TO ENGAGE.’”

Thanks for asking @charliespiering … there's a lot of misreporting out there about that briefing. The answer to your question is, I DID NOT. What I said was, "OKAY, YOU DON'T WANT TO ENGAGE." https://t.co/xmu5YR7gXr

However, this is not the first time Kimberly Halkett involved in a cursing controversy. In 2016, she was caught swearing when she was chasing an interview and Washington Post reporter Dalton Bennett posted a Vine showing Halkett yelling at a woman behind her, “Thanks a lot, b****!” after she failed to chase down someone for an interview before a presidential debate in September 2016.

In 1998, she started to work for Al Jazeera and is a White House correspondent for Al Jazeera English, in 2006 she reported on four presidents and their administrations, including Bill Clinton, George W. Bush, Barack Obama, and Donald Trump.

From 2006 to 2010, she worked as both an anchor and reporter. Curently, she is covering the administration of Donald Trump.

She started her carer as News Anchor at CJVI AM900 and joined CBC Television as Editorial Assitant. Then, she served as the Producer at CBC Radio Canada for less than a year before joining BCTV News as Anchor, over there she worked from 1994 to 1996.

Later, in her career, she served as Anchor for VTV Vancouver Television, North American Correspondent at Fox Television, and National Correspondent and Producer at Global Television. Talking about her education she attended Ryerson Unversity and graduated with a Bachelor of Applied Arts, Journalism.

Her parents married in 1968 and have three children, her grandfather, Bill Halkett, was a newspaper photojournalist and had an influence on her career decision.

Her Husband’s name is not available but escorted former House Speaker Paul Ryan through Afganistan during his overseas visit in 2018, according to her Facebook.

She shares five kids along with her husband and daughter, Brooklyn Hope Renseberger, who graduated from high school this May.

Estimated Net Worth of her is under review. She stands 5 feet 5 inches tall and weighs around 57KG.