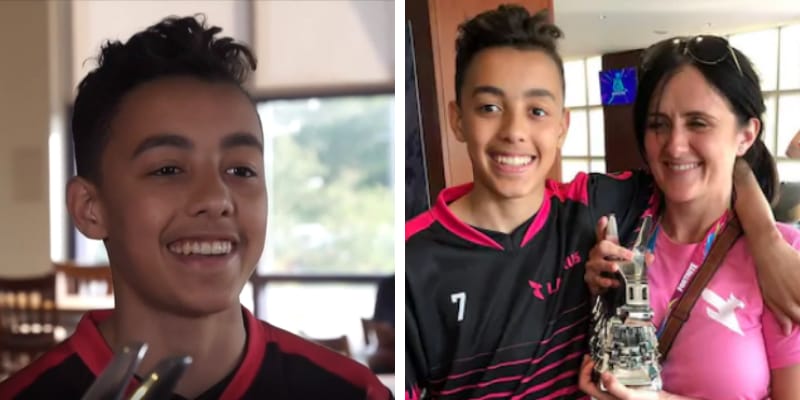 Jaden Ashman is 15 years old from Essex, England. He is a Gamer who recently won almost £1 million at a gaming tournament said he is happy to have shown his mother that he was not just wasting time in his bedroom.

At the first Fortnite World Cup Jaden and his partner, Dave Jong came second in the competition and they competed under the name Wolfiez at the three-day event held inside the Arthur Ashe tennis stadium in New York, which also hosts the final of the US Open.

More than 100 finalists were set to take part in the event’s various competitions, having been whittled down from around 40 million who attempted to qualify for the tournament and compete for the 3 million US dollar (£2.4 million) top prize.

More than 30 countries were expected to be represented at the finals, which featured a duo competition for pairs and a ‘creative’ tournament where teams of four aim to complete different in-game trials.

After the win, Jaden Ashman in an interview with BBC told that “Me and my mum, we clash quite a lot. Like, she didn’t understand how it worked, so she thought that I was spending eight hours a day in my room just wasting my time.” and added, “So now that I’ve proved to her that I can do stuff, I’m really happy.”

Jaden Ashman mother, Lisa Dallman, told the BBC: ‘If I’m honest with you I’ve been quite against him gaming. I’ve been more pushing him to his schoolwork. ‘I’ve thrown an Xbox out, snapped a headset, we’ve had a nightmare.

Asked about the prize money, Ms. Dallman said: ‘I think Jaden’s not a materialistic person. He will have a lifetime supply of Uber Eats, and I think that will do him, to be fair. ‘Just sitting there playing video games and eating takeaways, Jaden would be in his element.’

How old is Jaden Ashman? was born in 2004 and from Essex, England and he is 15 years old as of 2019. Lisa Dallman is the mother of Jaden and there is not much information about his father and siblings.