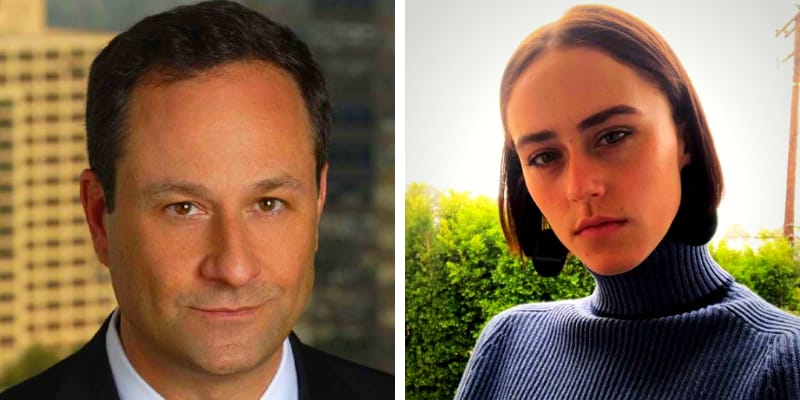 Ella Emhoff is 21 years old and daughter of Douglas Emhoff (Father) and step-daughter of Kamala Harris.

Ella is 21 years and a student at the Parsons School of Design, studying Apparel and Textiles, and she’s set to graduate next year in 2021.

Curently, she lives in Brooklyn, New York, United States. In July 2015, she served as Intern at A.L.C and then Joined The Hass Brothers as Fabricatory and served there from June 2018 to August 2019.

Talking about her education she is set to graduate from Parson School of Design in 2021, she is studying Bachelor of Fine Arts (BFA).

Ella showcase her design talent on Instagram to her followers, she has made Coats, Hats, knit Shorts, Jackets, and many more. Furthermore, Ella has her own website “Ellaemhoff.com” and takes a commission and sell her Design’s through the Online platform. On Instagram, she has 2.1k followers.

Apart from this, Ella was in Bo Burnham’s music video for “Repeat Stuff,” in 2014, it was Directed by Rami Hachache and Produced by PRETTYBIRD. Watch the Vidoe Below.

She is the daughter of Douglas Emhoff (Father) Kerstin Emhoff (Mother), she also has a brother named Cole Emhoff.

Ella and her biological mother Kerstin Emhoff are very close, on Instagram she quite often shares her mother’s picture. On September 15, 2017, Ella wished her brother Cole on his Birthday, she wrote “happy birthday cole!!!! easily the coolest brother and best friend. I love and miss you a lot.”

Douglas is an entertainment lawyer and began his career at Pillsbury Winthrop’s litigation group. In 2000, he launched his own firm with Ben Whitwell, and the firm was acquired by Venable in 2006. Curently, he’s now serving at DLA Piper, working at its Washington, D.C., and California offices.

However, there is not much information about her Boyfriend and relationship status, as of now, she is single.

Estimated Net Worth of her is under review. She stands 5 feet 6 inches tall and weighs around 53KG.