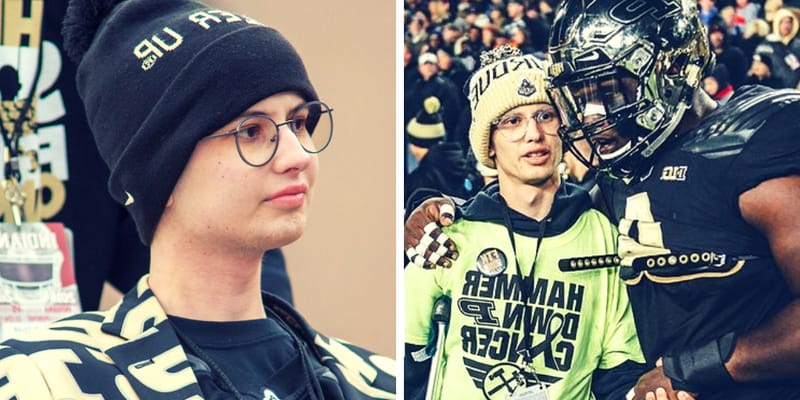 Tyler Trent was born on September 7, 1998, in Carmel, Indiana, USA. On January 1, 2019, he passed away due to rare Bone Cancer. Furthermore, he came to limelight after becoming an Adopted captain of Boilermakers football team.

Tyler life changed in summer when he went out with friends to play Frisbee, in fact, while throwing the Frisbee Tyler Trent broke his arm and came to know his bone was weak and was suffering from Osteosarcoma. Furthermore, on October 2014, his top half arm from shoulder to elbow was replaced by Titanium and he was under chemotherapy for 9 months. Later, Tyler Trent finished out his freshman year at Purdue University and earned an Associate degree in Computer Information Technology. But before four months to join Purdue University on presidential scholarship once again cancer spread to his bone.

On September 2017, Tyler Trent underwent surgery and doctor removed his pelvis. In fact, he went to school after a few days of surgery. Later, on September 2017 even after surgery, he camped outside the stadium so that he can get the first-row ticket in Michigan Game and during that game, Jeff Brohm was first to see him.

Jeff Brohm said in an Interview that “You just see a guy dressed in Purdue garb head-to-toe a big smile on his face and He didn’t tell me his story & didn’t tell me what he was going through. He just had a positive attitude and brought a lot of light to the conversation”

In 2017, Tyler Trent was Honorary Bowl Captain and on 2018 he was the season opener. But on January 1, 2019, he passed away and Purdue Cancer Center said that.

“It’s with the deepest sorrow that we have to say goodbye toTylerTrent.” Later, “words can’t express how sorry we are that he has passed. His life May have been short, but his legacy with being forever.”