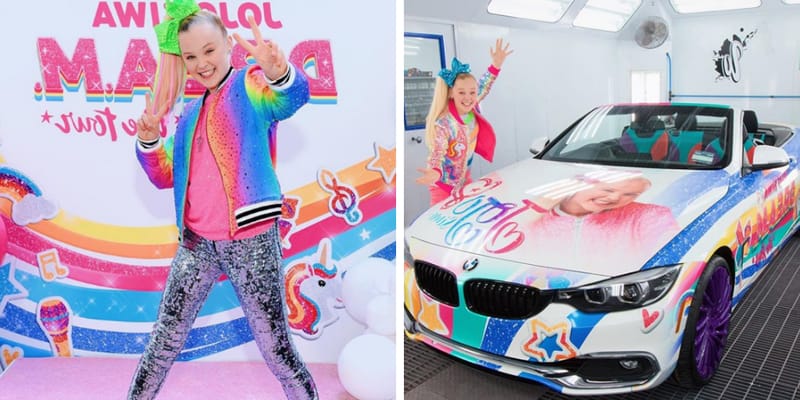 Jojo Siwa aka Joelle Joanie Siwa was born on May 19, 2003, in Los Angeles, California, United States of America. She is a popular American dancer, singer, YouTuber, and an actress. She is famous for her appearance in Dance Moms and Boomerang. Jojo Siwa age is presently 15 years.

Recently the famous American singer, Justin Bieber apologized to Jojo Siwa after telling her to burn her new car. Recently on December 22, 2018, the actress was gifted with a BMW car for Christmas that had a design of her face on the hood of the car. When it was posted on the company’s officials Instagram, it was seen by Justin, who was not much impressed by it. Later the singer posted a comment stating to “Burn it.” Later, he apologized to Jojo on twitter stating that he had nothing against Jojo and it was just the color and the colors on the car which he did not like. With Justin’s comment, Jojo accepted his apology and she also offered him a spot to perform on her 16th birthday party.

Dr. Tom Siwa is the father of Jojo and he is a chiropractor and her mother name is Jessalyn Siwa, is a professional dance instructor. Jojo has a brother named Jayden Siwa. The dancer is still pursuing her education in a private school in Los Angeles.

Jojo had appeared in the second season of ‘Abby’s Ultimate Dance Competition’ along with her mother and she was one of the top-5 finalists. Later she was eliminated in week 9. In 2014, she had given an audition for Abby Lee Miller’s ALDC Dance competition and was later selected. Jojo Siwa Dance moms appearance on 2016 made her gained her more fame.

In the mid of 2016, Jojo Siwa released ‘Boomerang’ song for digital download and it addresses the subject of online bullying. She has also released ‘I can Make U Dance’. Her video has got more than 400 million views.

Jojo Siwa Songs are ‘D.R.E.A.M’, ‘Only Getting Better’, ‘High Top Shoes’, ‘Hold the Drama’, ‘Kid in a Candy Store’, Boomerang, and ‘Every Girl’s a Super Girl’. At a young age, she has won a couple of awards like Industry Dance Awards in 2015, Reality Television Awards in 2016 and Nickelodeon Kid’s Choice Awards in 2017-2018 for Favorite Viral Music Artist.

Jojo was said to be in a relationship with Matty B. previously. But currently, she is single and is very dedicated about her career and dancing. We will be updating more information about her personal life very soon.

The estimated net worth of Jojo is said to be around $ 7 million.