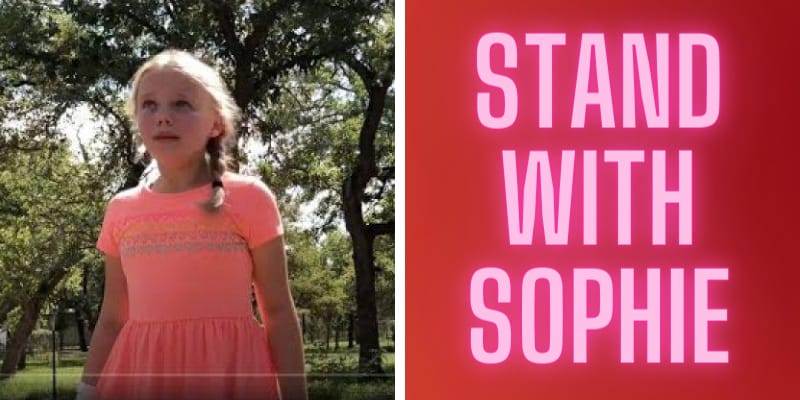 Sophie (Sophie Stand With Sophie) is 9 years old and from Texas, USA. Her video has gone viral on social media where she pleading with her mother and grandmother, alleging that she has suffered abuse at her mother’s home, and refusing to leave the vehicle during a custody exchange.

This video was taken by her father and placed on a gofundme page is presently in a safe home. Curently, Sophie’s parent on a family court case and The GoFundMe campaign has been started by Sophie’s stepmother, was posted on August 21 and has already raised over $50,000, doubling its target of $25,000.

According to the page “Sophie, 9 years old, has disclosed she has been continuously subjected to domestic violence, sexual grooming, and most recently molestation/rape in her primary residence. Her father is fighting for her life while her abusers pull every resource to get their hands back on her. The biological mother, according to Sophie, is a part of the sexual abuse and is encouraging it. We have gone through 30 thousand dollars since June and the fight somehow isn’t over.”

“We have been dealing with CPS, Law Enforcement, Lawyers, DFPS, Forensic interviews, and several doctors that are helping with Sophie’s recent medical issues in her private areas and as a resolute of the assault by her mother and grandmother in this video. She is desperate to be saved from that environment and we are desperate to help her. She states her life has been threatened by these people and she is afraid, but has a brave heart and wants to help her brothers get away from the abuse too.”

Sophie pleading with her Mother and Grandmother She Suffered Abuse at Her Mother’s Home.

In the video, she is begging the biological mom’s mother (her grandmother) to listen and tells her what is happening to her.

However, the grandmother dismisses her completely and says that if she felt that bad about herself she couldn’t have gotten the lead in the school play or done gymnastics. She does not say anything about them abusing her but instead acts as if she never said it.

Also, her mother and grandmother attempt to drag her out of her father’s Vehicle and you can hear Sophie’s many pleas to not go back to that place of torment for her young mind and body.

Lacy Lakeview Police Department, Chief John Truehitt wrote on Facebook “female juvenile shown in numerous YouTube videos taken by her father and placed on a gofundme page is presently in a safe home,” and police chief wrote that the father lives “about 100 miles south of Lacy Lakeview” and the mother is “about 100 miles north.”

Later, Truehitt added that “In July 2020, the father reported the sexual abuse of the child to the appropriate law enforcement agency where the offense(s) occurred – These offenses did NOT occur in Lacy Lakeview.”