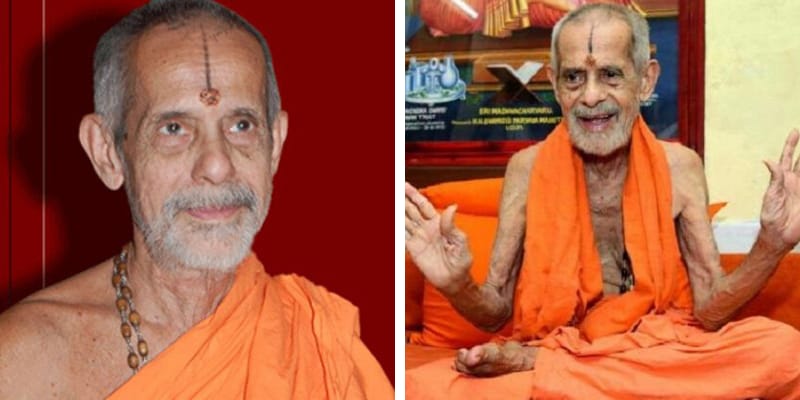 Pejawar Swamiji real birth name is Sri Vishvesha Tirtharu and also know as Śrī Śrī 1008 Śrī Viśveśa-tīrtha Śrīpādangalavaru was born on 27 April 1931 at Ramakunja, Karnataka. He is an Indian Hindu guru, saint and the current presiding Swamiji of the Sri Pejavara Adokshaja Matha, one of the Ashta Mathas belonging to the Dvaita school of philosophy, founded by Sri Madhvacharya.

However, Pejawar Swamiji’s health condition is very serious and Shobha Karandlaje, Udupi-Chikkamagaluru MP, said on Saturday that there was no improvement in the health condition. On December 20, 2019, he was admitted to the Kasturba Hospital and since then his health condition has not improved. Sri Vishvesha Tirtharu is the 32nd in the lineage of the Pejavara matha, starting from Sri Adhokshaja Tirtharu, who was one of the direct disciples of Sri Madhvacharya. He is also the honorary president of Vishva Tulu Sammelana. He has also established Poornaprajna Vidyapeetha in Bangalore, which has completed over 63 years. Many scholars are trained here on Vedanta.

Pejawar Swamiji was born in 1931 at Ramakunja to a Shivalli Madhwa Brahmin family, Vishvesha Teertha was ordained into Sanyasa at the young age of 8 years in 1938. During his first Paryaya in 1954, he organized the All India Madhva Conference in Udupi. During his second Paryaya in 1968, he got the Badagumalige in Udupi repaired.

ABMM has many hostels all over Karnataka at places like Bengaluru, Hubli, Dharwad, and Bagalkot. Where these hostels give preference to very-poor students and give them accommodation and food at almost free.

Additionally, Sri Vishvesha Tirtharu advocates Vishva Hindu Parishad (VHP) and was at the forefront in supporting the Ram Janmabhoomi movement. He has also led the Go Raksha movement.