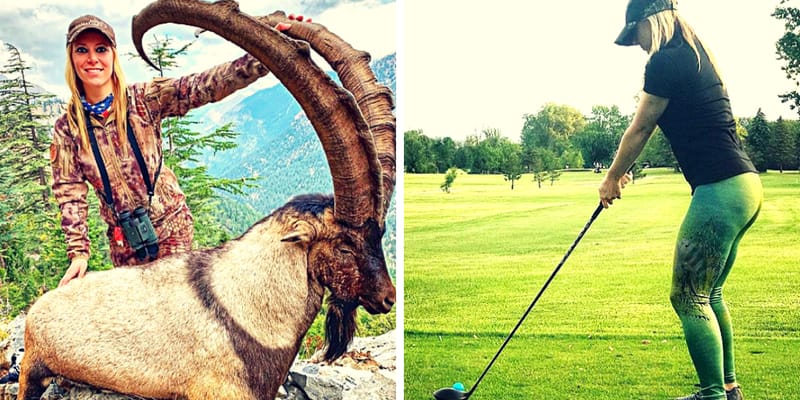 Larysa Switlyk is an American TV host, Hunter, Fisher, Actress, and a former Body Builder. Larysa is popular for hosting the TV show ‘Larysa Unleashed’. She was born on June 17, 1985, in Sarasota, Florida, United States of America.

Recently on October 23, 2018, Larysa Switlyk posted a picture of a dead wild goat on her Instagram and Twitter accounts that she had hunted and killed from her hunting gun. This incident took place on the picturesque island. Within few hours of her post, the hunting picture went viral across the social media and internet and as a result she was criticized by many celebrities for her act of killing an innocent animal and she also faced many critics form famous political personalities.

It was not the only kill that she had, instead of another photo that she took along with her partner also indicates another wild goat that is been killed by her partner.

As Larysa has not revealed much about the information related to her parents and family we will be updating the information shortly. She is said to have three brothers whose name is not yet known.

Larysa was initially working as an accountant in New York City for a certain number of months and since her interest was for fishing and hunting, she left her job to pursue her passion and hosted the hunting and fishing show named ‘Larysa Unleashed’. She also works with other shows like Hunt for a Life Time that grants hunting and fishing trips. Larysa Switlyk is also said to have worked as a Real Estate Agent in Florida and she has also appeared in ‘Top Hooker’ TV series.

Recently the hunt of a wild goat that she made on October 23, 2018, and posted on social media grabbed the attention of many people and famous personalities who began criticizing the hunter for hunting and killing an innocent creature.