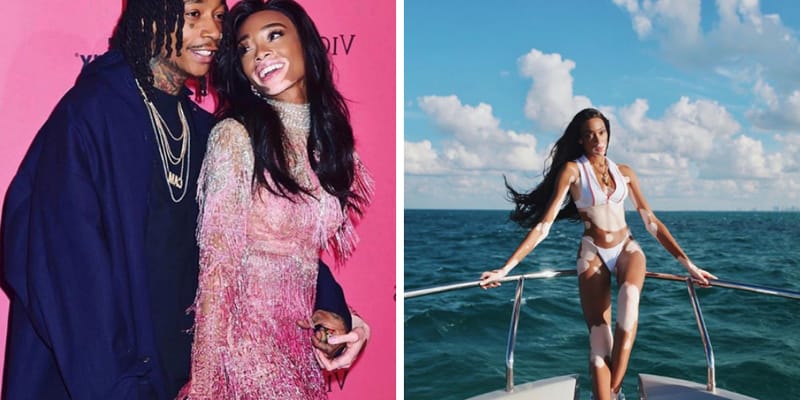 Winnie Harlow is a Canadian Public Model and a Spokesperson. She has a Vitiligo skin and was born on July 27, 1994, in Toronto, Ontario, Canada. In the recent days, she has been in the news for appearing with her boyfriend Wiz Khalifa who is a popular rapper for the Victoria’s Secret Fashion Show on November 8, 2018.

There were some rumors that the two were dating each other but were not spotted together anywhere. Winnie had also not mentioned about her Relationship with Wiz previously but with the presence of the due in the show it is confirmed that they are in a relationship. In some of the interview, Wiz had not confirmed about the relationship and later he posted photos with Winnie Harlow on the Instagram that went very viral.

Windsor Young is the father of Winnie and her mother name is Lisa Brown. Winnie had two sisters and from her early age, she has been diagnosed with Vitiligo Chronic Skin condition where depigmentation occurs over some portions of the skin.

She had faced much harassment during her school days and this led her to change schools frequently. It is said that she had also attempted for suicide. There not much information known about the schools and educational background.

Winnie initially got an opportunity to participate in America’s Next Top Model with the help of Tyra Banks who is said to be a host. She is said to be the first Canadian to be cast in the show. Even though she got eliminated in the finals, she came back and participated in Cycles photo shoots.

After getting eliminated from ANTM she got the opportunity to become the Desigual French Clothing brand representative. She had modeled for many fashion magazines like Glamour, Vogue, Ebony. In the year 2016, she was chosen for BBC’s 100 Women.

She had spoken in many events like TED about her early experience in her life and also at Women in the World Foundation Summit.  Winnie Harlow has also appeared in music videos like, ‘Guys over gear’, ‘The One’, and ‘Lemonade’.

Winnie is said to be in a relationship with Lewis Hamilton is a famous British F1 racer. However, they have not disclosed about her Relationship officially. Later they were separated.  But recently her presence with Wiz Khalifa has shattered all the rumors and we can say that they are dating.

The estimated net worth of Winnie is around $ 4 million USD.