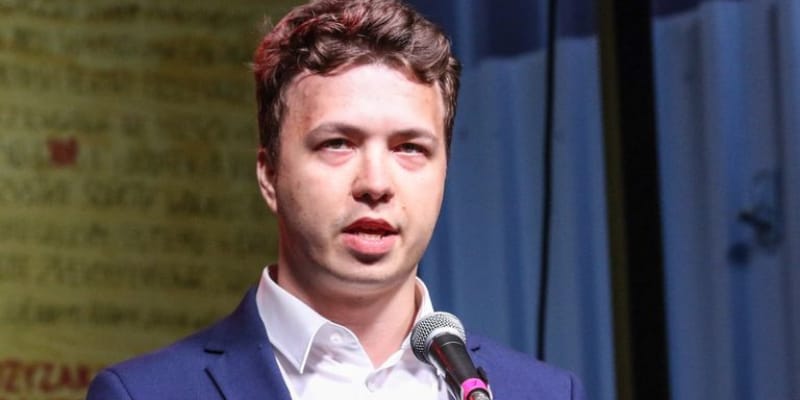 Roman Protasevich is 26 years old Belarussian journalist and co-founder of the opposition Nexta channel on Telegram, used for mobilizing street protests. On 23rd May, he was arrested by Belarus by diverting the Ryanair airline, on Monday Ryanair slammed Belarus on Monday over what it described as a “state-sponsored hijacking” of one of its passenger planes.

Ryanair slammed Belarus on Monday over what it described as a “state-sponsored hijacking” of one of its passenger planes. Furthermore, the interception of a commercial flight from one European Union nation to another sparked global condemnation, and EU leaders were due to discuss further action against the government of Belarusian President Alexander Lukashenko later Monday.

“It appears the authorities intended to remove a journalist and his traveling companion, and we believe there were also some KGB agents offloaded off the aircraft,” O’Leary told Newstalk Breakfast radio on Monday. Later, Irish Foreign Minister Simon Coveney said that secret service agents may have been on the plane, telling RTE’s Morning Ireland program Monday that the agents were “clearly linked to the Belarusian regime.” “When the plane landed, either five or six people didn’t reboard the plane before it took off again, but only one or two people were actually arrested, so that certainly would suggest that a number of the other people who left the plane were secret service,” he said, adding that he couldn’t be sure the members were KGB agents.

Who is Roman Protasevich?

Roman Protasevich is 26 years old and was editor-in-chief of Warsaw-based Nexta Live, a social media channel on Telegram, a cloud-based encrypted messaging application created by two Russian engineers that have become the favored way of organizing anti-Lukashenko protests.

Nexta Live, which currently has 1.2 million subscribers, was founded by another Belarusian opposition journalist, Stepan Putilo, whose pen name is Svetlov. In October, a court in Minsk added Nexta Live and even its logo to the government list of “extremist” information organizations, which means that republishing or quoting its news content in the Belarusian media is considered a crime. In recent months, Protasevich shifted to Lithuania, where he edited another opposition Telegram channel called Belamova, which currently has 260,000 subscribers.

He left Belarus in 2019 and in January 2020 applied for Polish citizenship. His anti-Lukashenko activities go back to 2011 – as a teenager, he was expelled from school for taking part in a protest.

How old is Roman Protasevich?

The estimated Net Worth of Roman Protasevich is between $400k to $600K USD.