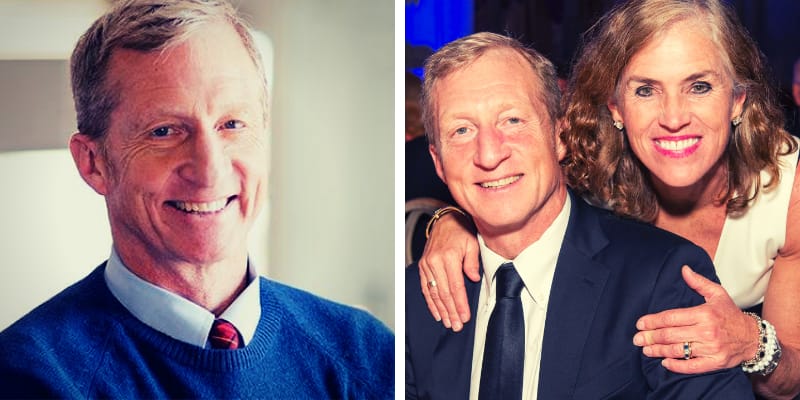 Tom Steyer was born on June 27, 1957, and from New York City, New York, U.S. He is an American billionaire hedge fund manager, philanthropist, environmentalist, liberal activist, and fundraiser. Recently, he is the best known for his efforts lobbying lawmakers to impeach President Donald Trump, is again considering running for president himself as a Democrat.

According to the report during the U.S presidential election, Tom spent $75.0 million to help mobilize voters and hosted various functions to back Hillary Clinton and tried to prevent Donald Trump from becoming president.

Overall estimation he spent approximately $90.0 million in the last election. In fact, Tom spent $10.0 million on a campaign to impeach Donald Trump. However, Trump took to Twitter and wrote: “Wacky & totally unhinged Tom Steyer, who has been fighting me and my Make America Great Again agenda from beginning, never wins elections!.”

He started his career at Morgan Stanley in 1979 and after few years of working there, he left and joined Goldman Sachs as an associate in the risk arbitrage division and served there between 1983 to 1985.

In January 1986, Steyer left Hellman & Friedman to start his own investment firm, Farallon Capital and Tom is the founder and former co-senior managing partner of Farallon Capital and the co-founder of One California Bank. It was while running his firm that Steyer would make his fortune. And by the time he left in October of 2012, the company he had built from nothing was managing approximately $20.0 billion in the capital for institutions and high-net-worth individuals.

He tied the knot with his wife Kat Taylor in 1986 at the Memorial Church at Stanford University, where they had met as students. Later, the ceremony was officiated by both a Jewish rabbi and a Presbyterian minister.

According to the Linkedin profile: Samuel Taylor studied math and played lacrosse at Harvard University. He then followed in the family tradition of attending Stanford his master’s degree, studying computational and mathematical engineering. He is the co-founder and analytics chief of a company called Station A in San Francisco, which states on its website that its mission is to “transition the world to 100% clean energy.”

How old is Tom Steyer? was born on June 27, 1957, and from New York City, New York, the U.S and he is 63 years old as of 2019. Furthermore, his father Roy Steyer, was a partner at the law firm, Sullivan & Cromwell and mother Marnie Fahr Steyer worked as a public school teacher in New York City.

Fahr Steyer passed away on May 21, 2002. She was 78 and had been diagnosed with lung cancer. In 2016, Tom explained in a Blog Post on a medium that his mother was a lifelong smoker and also expressed “I like to think that, if Mom were still with us today, she’d be happy with the strides we’ve made to protect our children from the ongoing health crisis of tobacco addiction.”

Tom Steyer is the youngest of his siblings, Hume Steyer (oldest brother) and Jim Steyer (middle brother) are both lawyers.