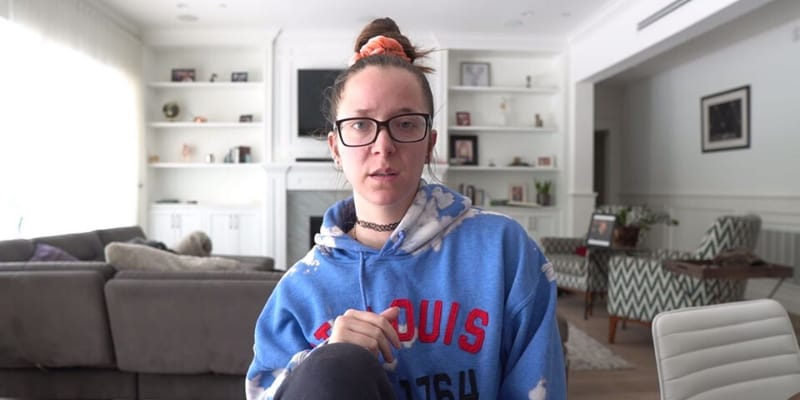 Jenna Marbles aka Jenna Nicole Mourey is an American YouTube personality, vlogger, comedian, and actress. Recently, Jenna announced she is quitting YouTube indefinitely, leaving fans completely at a loss for words, but following her departure, the internet is calling out other big YouTube names demanding accountability.

On June 26th, Jenna took to YouTube to share what might be her final YouTube video titled, “A Message,” where she tearfully addressed her decision to step down from the platform. In the video, she Jenna began by apologizing for past actions and revealed she’d be stepping away from creating content, she said: “we’re at a time where we are purging ourselves of anything and everything toxic.”

Later, in the video, she said “I’m not completely unproblematic, and I’ve tried my best to grow up and to be a better person.” Jenna has been in Youtube for more than 10 years revealed that she’s happy to address the things she’s been called out for in her past, saying, “What I want from
the people that I support and that I like is to have accountability and to know that I am supporting someone whose morals and values align with my own.”

Furthermore, she made many of her early ‘problematic’ videos private and also addressed why she did that, adding, “I’m sorry if any of that holds any nostalgia for you but I’m literally not trying to put out negative things into the world.” Then, added “If that’s the case where people will watch something and be offended now, I don’t want it to exist. So I probably deleted a lot of my old content because I just don’t want anyone to feel upset about anything. I don’t want to contribute to that.”

Her video titled “What Nicki Minaj wants in a Man” has also been set to private which was uploaded in 2011. In the video, she impersonated Nicki Minaj by doing blackface. She admitted the now-private video was “incredibly crazy and embarrassing” and even showed fans a snippet of the video to bring awareness to the issue if they see screenshots on the
Internet.

Furthermore, in her next apology, Jenna addressed a video she posted in 2012 that came across as blatant slut-shaming, which she recalled as “the hardest year of her life.” In her apology video, Jenna tears up and said “The only thing I would like to say is that I’m… I’m just a person trying to navigate the world the same way that you are. So I don’t always know what’s right, what’s wrong, what the truth is, and I’m just trying my best.”