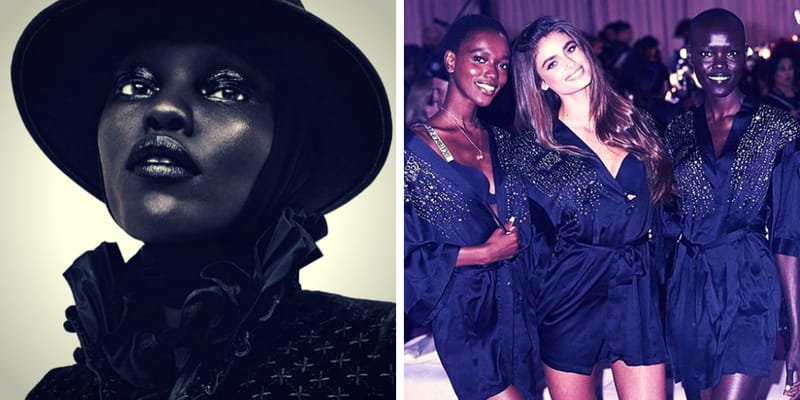 Grace Bol is a South Sudanese fashion Model was born on January 1, 1990, in South Sudan. In Victoria’s Secret Fashion show that was held recently in New York City on November 8, the models who were present in the show took their own runway look and Grace Bol was one of them.

Grace was looking very stunning in the runway with her shaved head. There was an after-party that was held after the fashion and most of the models presented themselves flawlessly. Grace had opted for a berry lip that was slightly more Red than the shade that she was wearing during the show. Grace was bought up by her grandmother since her childhood and had a very hard life. Her high school education was completed from a local school in Kansas City, Missouri, United States of America. She loves her mother and grandmother very much.

Her father was said to be married twice and Grace is said to have over 9 siblings. There is not much information that is been revealed about her early life and it seems that she had undergone many hardships in life.

At the age of 10 years, Grace Bol move to New York City to build a career of her own. By the time she was 19 years old, she started her modeling career with a dream to become a model. Later she signed a contract with Major Model Agency and this when she got her first breakthrough.

She also walked the fall 2011 Maldon Martin Margiela, Vienna Westwood show in Paris. In 2015, she had also appeared for the runway for other shows like Balenciaga, Hermes, Rick Owens, and Proenza Schouler.

She had walked for Victoria’s Secret Fashion Show in 2017 that was held in Shanghai and also in 2018. Bol has also appeared in various editorials and magazines like Marie Claire, Vogue, W Magazine.

Grace had not spoken much about her affairs or any relationship with anyone. She likes to focus on her career and keeps her personal life very private.