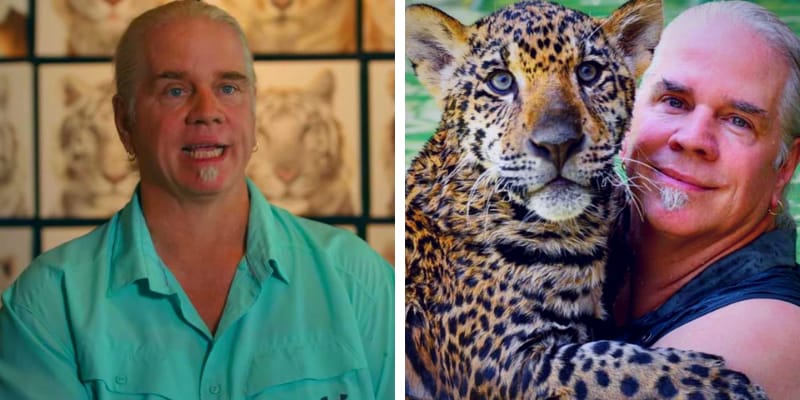 Doc Antle aka Mahamayavi Bhagavan Antle was born on March 25, 1960, and Salinas, California, United States. He is the founder and director of The Institute for Greatly Endangered and Rare Species (T.I.G.E.R.S.). Furthermore, he is also known as Kevin Antle.

Recently, he was featured on the Popular Netflix Documentary Series, ‘Tiger King‘ and it was released on 20 March 2020, and in total it has 7 episodes, this show was directed by Eric Goode and Rebecca Chaiklin. In the Netflix series, Doc Antle was one of the sources of inspiration and mentorship for Joe Exotic. 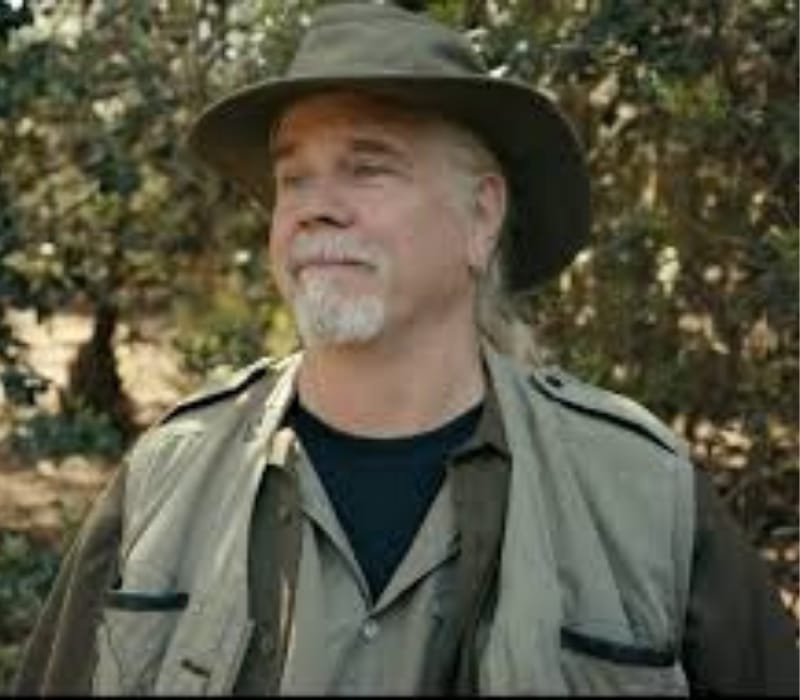 However, Doc Antle’s private lifestyle has been questioned now and people want to know how he operated the wildlife preserve, in the film Barbara Fisher who was a former trainer at his facility and served their former trainer at his facility and she also Tweeted “So…Bhagavan has been saying I was never anything but a part-time babysitter. I’ve been saying I raised cubs and did photos all day every day for years…here’s a photo someone took with my wrist and tattoo in it.”

So…Bhagavan has been saying I was never anything but a part-time babysitter. I’ve been saying I raised cubs and did photos all day every day for years…here’s a photo someone took with my wrist and tattoo in it. https://t.co/7DvMPhlL93

Then, in an interview with Iowa Examiner, Barbara revealed that he used to pay the female trainer only $100 per week even after working from 8 a.m. to midnight and then she described a cult-like atmosphere where the female trainers competed for Antle’s attention, she said. But what is Doc Antle’s response to the claim?

Doc Antle denied all these allegations and disputed any claims of abuse, running a cult or underpaying the trainers. Moreover, he was disappointed about how he was portrayed in the Netflix series. On 25th March Dr. Bhagavan Antle wrote a lengthy post on Facebook, below is the complete post.

“The staff at @myrtlebeachsafari. We are very disappointed that our facility was mentioned in the new Netflix series. We can only assume it is because Doc Antle has been such a high profile wildlife personality for so many decades that his association would create more buzz. It is important to understand that this series is not a documentary; it’s sensationalized entertainment with paid participants. Tiger King is the bizarre story of Joe and Carole and their feud. These characters are not representative of experts in the wildlife sector or world-class facilities like ours here in Myrtle Beach.

Myrtle Beach Safari has been recognized by the state of South Carolina as one of the pre-eminent wildlife facilities in the United States. We’ve also received international accolades for the critical role we provide with our qualified, captive breeding programs and our global conservation efforts of threatened and endangered species.

Myrtle Beach Safari adheres to all USDA guidelines, and our animals are treated with the utmost care. We have never had a USDA violation and work collaboratively with various state and federal wildlife agencies to ensure our animals receive the very best life every day.
Over the decades we have heard every sort of fantasy scenario regarding our facility. Many of these less-than-flattering mistruths have been manufactured by those in the animal rights movement that oppose animal ambassador programs of any sort.

In the end, we hope you will come to visit us and judge for yourself. Every visitor to our facility quickly recognizes the magical place we have created. We remain open during these challenging times with both Day and Night Safari options. Our tours are held outdoors and our 40-acre preserve provides plenty of area for social distance. Check out tour dates and options at myrtlbeachsafari.com.”

PETA HAS ACCUSED DOC ANTLE OF EXPLOITING HIS ANIMALS.

Tara Boppe has launched a petition to “investigate Doc Antle for animal abuse.” Till now 241 supported have signed out of 1000 people. 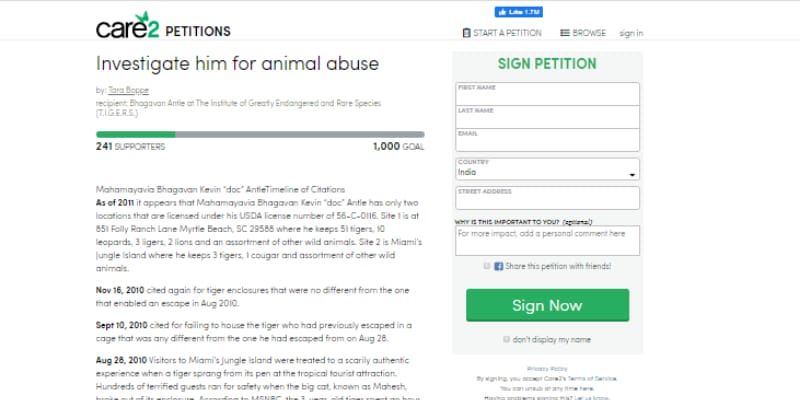 In 1983, he founded T.I.G.E.R.S. and runs a 50-Acre Wildlife Preserve, and its located in South Myrtle Beach, South Carolina, USA. Additionally, he is also the founder of the Rare Species Fund (RareSpeciesFund.org), a grassroots organization that supports wildlife conservation projects in situ around the globe.

In his preserve, there are around 200 animals, 34-year-old African elephant named Bubbles, a cheetah named Ramses, an 11-foot tall liger named Hercules, African fish eagle, Bengal tigers, and chimpanzees. Doc Antle spent most of his time on a vast cattle ranch in Arizona where he spent his formative years and as a young man he traveled around the world and spent the most amount of time in Asia. In 1982, he raised his first tiger cub after he borrowed from the presentation, and that cub featured in an Exxon commercial and it was first broken with the big cats.

Bhagavan Antle worked on over 500 films, documentaries, TV shows, and advertisements of all kinds, such as Ace Ventura, Dr. Doolittle, Mighty Joe Young, Disney’s Jungle Book and many, many more. His animal has been featured in Several Shows, Movies and Films, his tigers were used as part of Britney Spears’ Video Music Awards performance of “I’m a Slave 4 U.”

Doc Antle’s lion Arthur is seen roaring between the MGM logo at the beginning of the company’s movies.

At one point Doc Antle was the assistant of Jack Hanna and can be seen bringing in a black panther out during The Tonight Show with David Letterman and working as the big cat’s handler.

How old is Doc Antle? He was born on March 25, 1960, and Salinas, California, United States and he is 60 years old as of 2020. However, there is not much information about his father, mother, and siblings.

Talking about his education he received a degree in Chinese Medicine.

He was married to Dawn Marie Thurston but she passed way age of 29 in a car accident. The couple had two children, Kody and Tawny Antle. However, he was in a relationship with two other women named Ranjnee and Moksha during his trip to Asia.

But Doc Antle never revealed his extramarital affairs on the internet. Kody Antle is 30 years old and has 2 million-plus followers on Instagram and 13.4 million follow him on TikTok. Doc Antle Daughter Tawny Sky Antle has a Youtube channel with 186k subscribers.