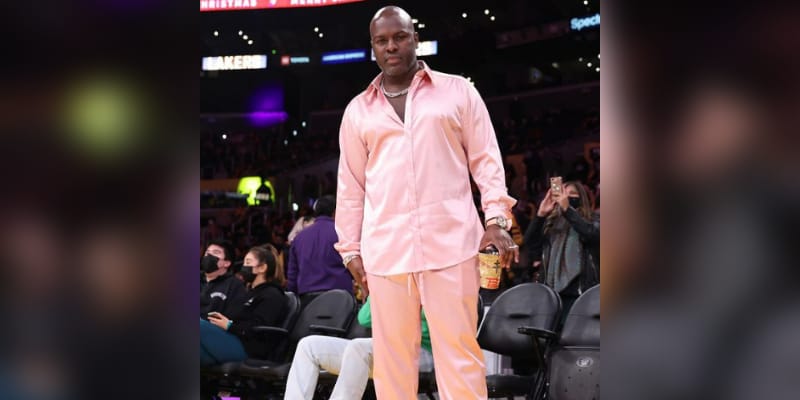 Corey Gamble is a talent manager and business executive. Fans believe Kris Jenner, 66, is secretly ENGAGED with Corey Gamble, 41, after seeing a large diamond ring in his hand. The reality actress has been candid about her love for Corey, but she hasn’t mentioned whether or not they will marry.

Fans have been buzzing about a clip from the Kardashians’ Hulu series, The Kardashians. Kris, 66, and her daughter Khloe, 37, are taking it up in the dressing room before the mother of one’s big debut on James Corden’s The Late Late Show. The 43-year-old TV personality then enters the room to ease Khloe’s fears, advising her to disregard her online critics.

While Khloe benefits from the pep talk, viewers’ attention was drawn to what looked to be a big ring on Kris’ left hand. Despite their age difference, the Keeping Up With the Kardashians veteran has been open about how much she and Corey, 41, are into each other.

In February, Corey was accused of cheating on Kris with another lady at a club, according to a bombshell accusation. Kanye West, the controversial musician, shared a snapshot from an illegal video of a guy he claimed to be Corey kissing a lady in a Miami nightclub on Instagram. However, Kanye soon erased the screenshot from his platform, as he has done with most of his recent posts.

Who is Corey Gamble?

Corey Gamble is a corporate entrepreneur and talent manager who is most known for his six-year relationship with Kris Jenner. He was born on November 10, 1980, and is 41 years old, the same age as Kris’ second eldest daughter, Kim Kardashian.

While Corey and Kris are 25 years apart in age, their birthdays are only five days apart, implying that they are both Scorpios. Corey is from Atlanta, Georgia, and studied business marketing at Morehouse College. He now resides in Los Angeles with Kris.

In August 2014, Corey and Kris met during fashion designer Riccardo Tisci’s 40th birthday party in Ibiza. Kanye West threw the party, and to be honest, we can’t think of a more opulent setting for these two to meet.

Although it’s unknown when Corey and Kris made their relationship public after meeting, Corey had accompanied the Kardashian family on vacation to Las Vegas for Kim’s birthday in October 2014.

In April 2015, while on a double date with Tish and Billy Ray Cyrus, the couple became Instagram-official. We adore a renowned friendship, even if it is a little strange. Despite reports of a split starting in 2017, the couple was subsequently speculated to be engaged after Kris appeared on The Late Late Show in August 2018 wearing a massive ring.

Corey followed the Kardashians to a private island in Tahiti for Kim’s 40th birthday celebration, where he took involved in an epic dance-off with Tristan Thompson that finished with Corey executing the SPLITS.

Sheree Buchanan, star of Atlanta Exes, is said to have dated Corey for three years. At the time the pair met, Kris was going through divorce procedures following her split from Caitlyn Jenner.

How old is Corey Gamble?

How Rich is Corey Gamble?

The estimated Net Worth of Corey Gamble is between $2 Million to $4 Million USD.